After 19 years, Musicport in its present form will cease after this years October shindig in Whitby. To be fair, it is going out with a bang, not a whimper.

Looking at the weekend as a whole, this year sees yet another diverse and exciting line up across three days at the Whitby Pavillion.

Whitby Pavillion is situated high above the port itself, overlooking the North Sea, split by the River Esk, and close to the famous whalebone arch, and across the harbour from the legendary Abbey, the inspiration for Bram Stoker’s novel Dracula.

Over the years, MusicPort has welcomed acts from across the world such as Vieux Farka Touré, The Mahotella Queens, Lemn Sissay, Tankus the Henge, Idlewild, Seckou Keita and Catrin Finch, Jeremy Hardy, Rachid Taha, The Buena Vista Social Club, The Levellers, Misty In Roots, Courtney Pine, Richard Hawley, The Afro Celt Sound System, Hugh Masekela, Chumbawamba, Mory Kante, Los De Abajo, Arthur Brown, The Blockheads, Dobet Gnahoré, The Demon Barbers XL, Duke Special, Dub Colossus, Transglobal Underground, Afrikan Boy, Varldens Band, Mari Boine…the list is a veritable who’s who of global roots music, and there have been so many more over the years. It was decided that in 2019 to invite back some favourites from the past as well as finding people who’ve not performed in Whitby before.

On Friday, “Finding Folk” is Phoebe Ophelia Douthwaite and a young Lancashire woman’s honest and encouraging tale of overcoming poor mental health in a family environment. Phoebe Ophelia shares personal stories of how she escaped the downfall of her own mental health through folk dance, music and song.

Another Friday “must-see” is Misty in Roots, Reggae legends who are as relevant now as when they were fundamental to Rock Against Racism in the 1970s and produced the classic Live At The Countervision album – a John Peel favourite! Almost certainly, a show not to miss.

On to Saturday, and one of the undoubted highlights sees Sarah Jane Morris take to the stage. If the name sounds familiar, then take a look at the video below…

Yes, that is the same Sarah Jane Morris who guested on arguably The Communards biggest hit, “Don’t Leave Me This Way” back in 1986.

Also not to miss, on the North Sea stage is The Jim Morray Trio

One of the most influential “traditional” artists, his new album “The Outlander” is due for release on the 11th October. It sees Jim on a “new” 1949 Epiphone Triumph archtop guitar and Sam Sweeney on violin. Recorded in a week, with contributions from other artists who were in the neighbourhood, it’s sure to be a hit.

For the final day, the organisers have really pushed the boat out.

Fresh from the success of the BBC TV show “Gentleman Jack” and its theme tune, Belinda O’Hooley takes us on a solo piano tour with her album “Inversions” with her wife Heidi Tidow having given birth to their first son, Flynn, in the last month. 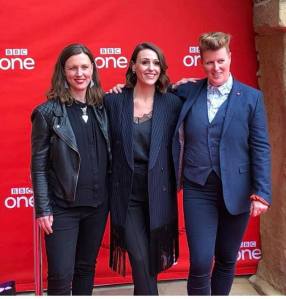 Once the festival itself has finished, it heads out on tour to villages in the area.

Its been a memorable 20 years of Musicport, and there will be many who will be sad to see it end in its present form.